My impending move to a new studio has renewed my drive to push my various projects forward. I always have such a massive list of things to get done, besides the actual making of artwork, that the work itself is, sadly, not always my first priority.  Over the last couple of weeks I’ve been taking my sketchbook for my painting, Pearl, everywhere with me. This means that, every spare moment I get I’m busy sketching away, perfecting the flowers that will make up part of the work.

Generally I’m not too interested in flowers as a subject matter. I’m more interested in their symbolism, and so they do feature in my work from time to time. However, I like to learn and understand how to depict them accurately before going on to paint in my usual, simplified style.

I do find it, sort of embarrassing to draw in front of other people. You might think I’d got over that by now, after drawing and studying around other people for years, but it’s not other artists who are the problem, it’s the people who aren’t artists. I find it terribly embarrassing when people point out that I’m “good at drawing”, and go on to point it out to everyone else around them, all the more so because I don’t think that drawing is one of my strongest skills! I’m reluctant to show anything less than a polished piece of work, so seeing my rough sketches and unfinished work is awkward, almost as if I’m nude in public! (I do, however, show some of my less finished work in blogs and on facebook, such as the work shared here now, because the relative anonymity makes it easier). So I’ve had to grin and bear it, while quietly muttering thank you’s as they suggest that I should be an artist and get a website etc.

The upshot of it all is that I’m quite happy with the flower studies produced so far, meaning I can get on with practising a painted version of the flowers soon 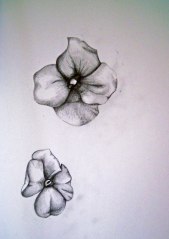 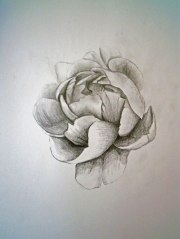 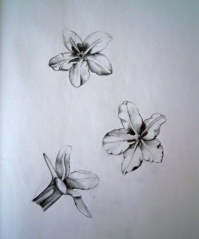 Sharon Mossbeck is a conceptual artist based in Sheffield. Mossbeck's work focuses on themes of death and religion, often presented in a vibrant, hedonistic manner. While based on themes of death, her work is more easily read as a celebration of life while questioning what may happen beyond. Mossbeck works in a variety of media, including painting, sculpture using found objects, photography and textiles. Available for commissions.
View all posts by Sharon Mossbeck →
This entry was posted in Art, Cross stitch and tagged art, artist, Conceptual art, contemporary art, current projects, drawing, fine art, flowers, gromwell, KIAC, new work, paeony, painting, public, sketches, wallflower. Bookmark the permalink.