The Thread of Life

For a long time I’ve been thinking about the thread of life as a starting point for a project. The thread of life comes from Greek myth, and relates to the three Fates, or Moirai; three women who decide on the destiny of each human being. The first of the Moirai spins the thread, the second allots it (or measures it) and the last cuts it, giving a predetermined lifespan. They are even sometimes said to have supremacy over the gods, deciding the fate of all. The idea of the thread of life lead me to think about DNA, as the idea relates directly to a thread with elements of predetermination. I have spent a long time thinking about how to move this idea forward, but I have now arrived at a project in which the work will take the form of a cross-stitch pattern. I have designed a simple cross-stitch pattern based on a strand of DNA, which will be available to download so that cross-stitchers can copy it and make their own version. The colour, style, and perhaps even the embellishments are all left to the stitcher to decide. I will invite anyone who wishes to take part to send in their finished pieces to form an exhibition. The idea being that each strand of DNA stitched will be as individual as the person stitching it. I recently put this idea forward as a residency proposal at Bank Street Arts in Sheffield, and I’m happy to say that they are very interested, and my application will be going ahead. For my own contribution to the residency I will be designing and stitching a very large scale cross-stitch piece, which I intend to be suspended from the ceiling. I have never worked on a cross stitch of this scale before, and I’m very excited about the challenge. My cross-stitch will again relate to the Moirai, and, although I intend to draw inspiration from an earlier cross-stitch piece of mine entitled Labyrinth (pictured here), I don’t know exactly what form it will take at the moment. I’m hoping to start my residency later in the year, and I’ll be looking at teaching cross-stitch workshops to help to get the maximum number of people involved in the DNA stitching project. If you would be interested in attending a workshop, or if you would like me to host a workshop as part of the residency at your venue somewhere around the country, please get in touch. You can email me sharonmossbeck@hotmail.co.uk 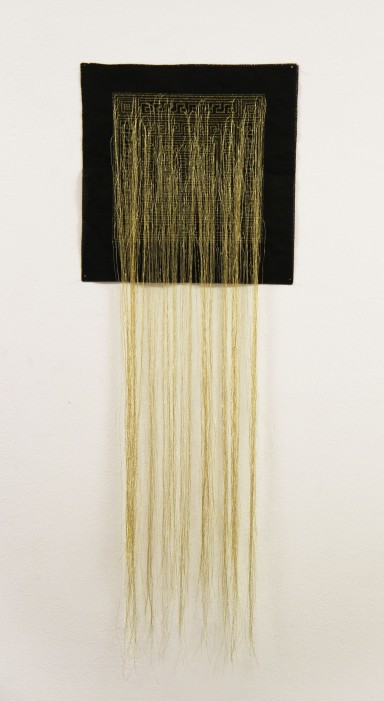 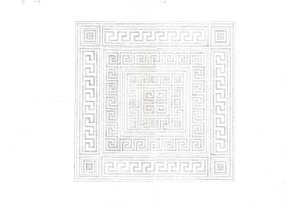 Sharon Mossbeck is a conceptual artist based in Sheffield. Mossbeck's work focuses on themes of death and religion, often presented in a vibrant, hedonistic manner. While based on themes of death, her work is more easily read as a celebration of life while questioning what may happen beyond. Mossbeck works in a variety of media, including painting, sculpture using found objects, photography and textiles. Available for commissions.
View all posts by Sharon Mossbeck →
This entry was posted in Art, Cross-stitch and tagged art, Bank Street Arts, cross stitch, cross stitch cross-stitch, DNA, exhibition, Fates, life and death, Moirai, new work, Open Submission, Residency, sewing, Sheffield, workshops. Bookmark the permalink.

2 Responses to The Thread of Life