Posted on December 5, 2016 by Sharon Mossbeck

Following on from my previous blog, which looked at what I’ve been doing since graduating in 2012, this blog looks at 2015 to 2016.

I started 2015 working on my biggest project to date, The Thread of Life. I feel like I have achieved a lot with this project, and I’m still very passionate about it and about in working in cross-stitch as a contemporary form of fine art. Most importantly for future projects is the fact that I secured Arts Council funding, which I’m told will be helpful when applying for funding in the future.

The Thread of Life at Cromford Mills Gallery, April 2016

I felt like this project took over my whole life, and I didn’t really get to make any other work that year. It was perhaps too ambitious to try to undertake in one year, but I also wanted to give myself a time limit to keep me motivated and to help me to give me a clear finishing point. The project was all about time, which in a way became a self-fulfilling prophecy. I would like to think that this contributed to the integrity of the work.

In 2016 I took on lots of projects and became involved in yet more projects planned by other people too. When in August it looked like I had a month free, me and Michael decided to hold our second Open Call exhibition and ended up working around the clock to pull it off. 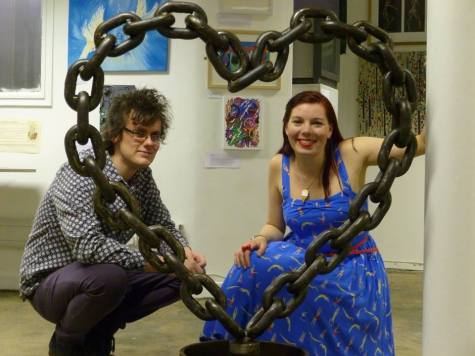 Michael Borkowsky and Sharon Mossbeck with a sculpture by Jason Heppenstall at UNITY, August 2016.

The reality of having a jam packed schedule is that I had hardly had time to produce new work and I’ve totally run myself into the ground. However, I am really proud of how much I have got done this year, and feel that I did everything to the highest standard possible, so I don’t feel that work was compromised by being so busy. Instead it was my social life and sleep that was compromised! Next year I am planning to cut right back on the amount of projects I want to take on in order to allow me to make more work.

Striking a balance is hard, but the more experience I gain of working as a professional artist, the more I feel able to focus on the more relevant or important opportunities.

Next year look out for another Open Call with Michael Borkowsky, exhibitions beyond Sheffield in collaboration with other artists, and more Contemporary Art Cross-stitch work and paintings.

Sharon Mossbeck is a conceptual artist based in Sheffield. Mossbeck's work focuses on themes of death and religion, often presented in a vibrant, hedonistic manner. While based on themes of death, her work is more easily read as a celebration of life while questioning what may happen beyond. Mossbeck works in a variety of media, including painting, sculpture using found objects, photography and textiles. Available for commissions.
View all posts by Sharon Mossbeck →
This entry was posted in Art, Cross stitch and tagged 2015, 2016, art, Collaboration, Conceptual art, contemporary art, Cromford Mills, cross stitch, current projects, exhibitions, fine art, gallery, open call, professional artist, reflections, talk, The Thread of Life, Time, time management, Unity, university of chester. Bookmark the permalink.